Greyhounds have long faced an uphill battle on the path to happiness – raced on tracks and discarded when they’re no longer commercially valuable to their owners. Jessica Brown, whose family just gained their second greyhound, visits a leading greyhound rescue charity amid a huge rescue operation

I was only trying to help keep him busy. My dad was in-between jobs and I casually suggested he pop down to the local greyhound rescue, to walk some of the dogs in-between job applications and interviews.

A few months later, I was meeting Randall (pictured above with my/our dad), my new, furry ‘brother’ for the first time. He cuddled up to me – cautiously at first – taking up an entire sofa in the living room. My dad looked over, besotted that his new child was bonding with his eldest. Relegated to hard dining room chairs, he and his partner looked over at me between dog toys and blankets, and I wondered how long it would be before Randall got a playmate….

In 1996, then-police officer Debra Rothery was stabbed while on duty. As she was recovering, she got talking to a man who kept greyhounds near her home, and she started taking them for walks.

She then adopted one of his greyhounds, and from there, learned about the problems of the greyhound racing industry and how many abandoned greyhounds are in need of loving owners across the country.

Debbie set up Tia Rescue for greyhounds and lurchers the same year, starting with 16 dogs in the kennels. Now, the charity can house up to 80 dogs at a time on the rural outskirts of Doncaster, South Yorkshire.

In this time, she’s also been at the helm of a growing local community of greyhound-lovers and owners that support each other and meet every month in the colder months for walks (either their own Tia rescues or one borrowed from the kennels).

The charity, which calls itself the “largest rescue/home-finding sanctuary in the UK”, rehomes around 250 greyhounds – and the odd lurcher – every year across Yorkshire, North Lincolnshire and Nottinghamshire. That’s more than 4,000 dogs since it was founded. It also rehomes horses – and has donkeys and goats on its farm, too.

While it’s had such a huge impact – the charity is completely donation-based, boosted by several charity shops scattered across the county – it doesn’t get any funding from the greyhound racing industry.

It’s a quiet Monday morning when I pop by – but for Tia Rescue, quiet means two excitable lurchers bounding around the office. One almost nicks a mince pie from the desk while staff attend to a urine-related emergency.

“We don’t run assessment tests, where dogs are out down if they fail,”says Debbie. “Loads of rescues test dogs now. But you need to retrain the dogs, give them a chance.”

“Deb is good at sussing out who needs what,” says Christy. “I try and encourage people to meet her before they see the dogs in the kennel. Otherwise, people can fall for a dog based on its looks, when the prettiest dog might not be an ideal dog for them. Deb talks to them about their circumstances and then suggests a few names.

“We had a woman the other day wanting a grey one because it matched her curtains.”

The farm is open to the public on weekends when people can see and walk the greyhounds. It also has a separate block of “sponsor dogs”, most of whom will see out the rest of their days on the farm.

“It could be that they’re not particularly easy to home and they’ve been here a long time,” Richardson says. “Or they could have costly medical problems and we wouldn’t expect someone to take on those costs.”

But the kennels are “spotless”, she says – it’s like luxury for Tia’s greyhounds, many of whom have never known life far beyond kennels.

Most of the dogs at Tia come from the racing industry, which has its own kennels for retirees, but not enough to meet demand. In 2017, almost 350 greyhounds were put down because a suitable home couldn’t be found for them, or costs were too high, and there were 257 racing fatalities and 4,837 injuries at tracks – and this is just those that were recorded.

“Trainers ring us and say they’ve got dogs for us, whether the dog has retired or has never raced in the first place, and as soon as we have space we take them,” Christy says. “But some of the trainers that don’t work with us will just chuck them out onto the streets.”

Thankfully, Debbie has noticed that more people are interested in adopting greyhounds now.

“A lot more people take greyhounds now. When I started 24 years ago, they wouldn’t entertain greyhounds. People thought they were killing machines, and now they know they’re not.”

“There’s a misconception that they need a lot of exercise, but they’re used to sharp, short bursts of exercise. A 20-minute walk and they’re done.”

Greyhounds are also popular for school programmes, such as the Kennel Club’s Bark and Read Foundation, for which rescue greyhound Danny and his owner Tony Nevett have done pioneering work to introduce the concept of kids reading to dogs in school. Because greyhounds are so laidback and don’t bark, they are the perfect companion.

But while public perception is improving, Tia Rescue still has many battles with the racing industry. 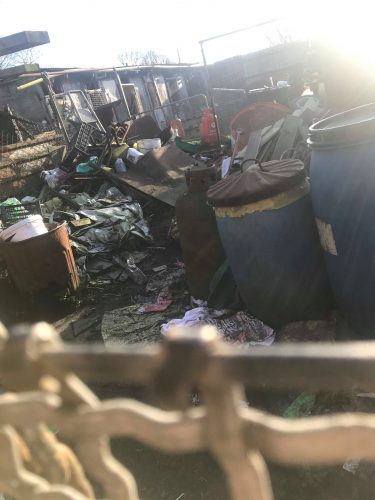 On 27th December, Debbie got a call to say there were 13 greyhounds on an allotment in nearby Sheffield, with no one looking after them. She wasn’t prepared for what she saw when she turned up.

She wrote on Facebook: “The sad, sad thing is that these dogs have been in a bad way for a long, long time. If only he had asked for help…Tia would have helped because that is what we do. We don’t judge.”

Now, the Sheffield 13 are slowly but surely being rescued and fostered.

Debbie says she isn’t tempted to use her police background on irresponsible owners.

“My background is the only thing that makes me keep my hands off them. The police won’t do anything, nor the RSPCA.”

Now, Tia is planning to undergo a big transition and refocus on the impending greyhound crisis. It states on its website: “With the racing industry starting to buckle Tia needs to be ready. It just needs one of the three Yorkshire tracks to fold and Tia will be swamped with unwanted racers. We will save as many as we can but undoubtedly some will fall through the safety net.”

To help free up kennel space for the Sheffield 13, my dad and his partner decided to foster another greyhound, Jaylyn, two weeks ago – so they could be sure the two got along without making the huge commitment of adoption.

Turns out she’s been great for Randall, who’s more nervous than her, and sometimes needs encouragement to go for a walk.

“She’s put more life into Randall,” my dad says. “He’s got a spring in his step and he’s a lot more confident now. They’ve started mirroring each others’ body language, which is fascinating to watch.”

He says Tia has managed to free up enough room in its kennels for the Sheffield 13, while they’re cared back to health.
“People with greyhounds are real advocates, we put the word out about the benefits of owning greyhounds. It’s a real community of people who are daft for these dogs – and it’s a community based on altruism. These dogs are all rescues and they’ve had horrible lives. Tia is there to save them – to literally save them.”