It’s the biggest day in the east London canine social calendar: the All Dogs Matter Victoria Park Dog Show. A favourite for dogs with exceptionally waggy derrières, riveting rescue tales and the wisdom of old age, their humans’ queue to pay the £3 registration fee to compete in categories such as Waggiest Tail, Best Rescue and Golden Oldie. Dog brands set up stalls along the show ring in one of London’s most beautiful parks, and a few canine attendees are sporting blue “Adopt me” bandanas. Through all this walks Abi, a confident, sweet staffordshire bull terrier cross, meeting and greeting the guests with the occasional bark. She looks like the cat that got the cream – and she kind of has. Her owner is Ira Moss, the founder of All Dogs Matter.

The north London dog rescue charity is one of the most prolific in the capital. Founded by Ira seven years ago, All Dogs Matter (ADM) has gone from rescuing and rehoming 50 dogs in its first year to more than 380 this year. Ira previously volunteered for around 10 years at The Mayhew Animal Home, one of the largest pet rescue organisations in the UK, and she knows the system: if an abandoned dog gets taken in by a local council or the police and is not reclaimed by its owner within seven days, it is likely to be put down. Most abandoned dogs – around 75% – are staffies.

Ira saw the need for more rescue places because of the sheer number of abandoned pets. She set up a dynamic organisation that can act fast to take at-risk dogs from local authorities in north London (Haringey, Camden, Enfield, Hackney and Tower Hamlets boroughs) and rehome them. Between being pulled from the councils and finding a forever home, the dogs are placed either with fosterers or at All Dogs Matter’s kennels in Waltham Abbey near London.
Owners can also surrender their dogs directly, although there is usually a month-long waiting list.

Abi, herself a rescue of course, is All Dogs Matter’s mascot and brand ambassador, and together they never stand still.

The organisation has attracted a dedicated network of volunteers and (celebrity) supporters. Ira has eschewed the dramatic, heart-wrenching messaging some other organisations opt for, and instead communicates the fun of life with a dog. Her approach has proven hugely popular, and the upbeat events draw in volunteers, prospective adopters and proud owners of “ex-All Dogs Matter” pooches alike. At a recent fund-raiser evening, comedian and long-standing ADM supporter Ricky Gervais was among the guests.

From dog shows to “Helloween” walks, funfairs and puppy parades to educational visits in schools, ADM is out with never-ending energy to raise funds and awareness. The Victoria Park event, where Wunderdog was among the judges, raised around £2,000 from sign-up fees and sponsorships. Dogs with “Adopt me” bandanas are always present at these events, and many meet their future owners out having fun, rather than stressed in a kennel. The dogs spend the day with a volunteer, celebs stop by to have their photo taken with a rescue pooch or to MC an event, and brands happily donate items to dogs down on their luck.

To be sure, rescuing dogs isn’t all fun walks and waggy tales. This month, ADM took in several dogs that were rescued by the Humane Society International from Yulin, China, where these pets would have been tortured to death during the notorious “dog meat festival”. Vet Scott Miller recently visited the London kennel for his TV show, The Vet on The Hill, to help with a particularly harrowing case of neglect.

At the charity’s office on a small shopping parade off the main road, that energy came literally running at Wunderdog when we first visited. Upon opening the door, four dogs – two of them rescue jack russell terriers who arrived only that morning – come towards us, all tails wagging, and alternating between lying on their backs for a belly rub and jumping up for extra attention. Abi barges in to demand the most cuddles, while fellow ADM office dog Dashy, a Cavalier King Charles spaniel, happily trots back and forth between us and his owner, Laura, one of their full-time volunteers. But it is not just the dogs’ tails that never stop: the phones in this office never stop ringing. Ever. 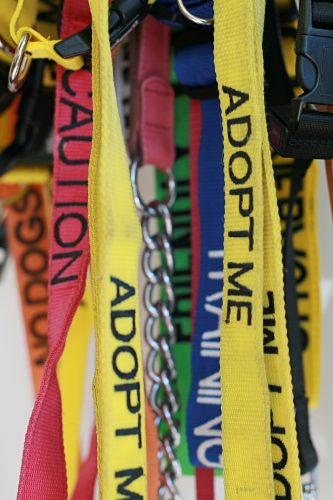 “When I worked at the Mayhew, I found there weren’t enough places for dogs,” Ira explains between phone calls at her desk under a huge All Dogs Matter logo. “I set up ADM with Peter Egan as chairman and help from another trustee called Alec Burns. I initially worked from home, and later we had an office a few doors up from here. We rehomed 50 dogs in the first year.” ( Egan a well-known actor, who starred in Downton Abbey, and a lifelong animal lover. Burns is a packaging producer and trustee of a charity for vulnerable people, the Ray Burns Charitable Trust.)

Since staffies are particularly vulnerable to attracting irresponsible humans who abandon them, Ira launched the “Don’t judge a staffie by its cover” campaign three years ago to educate the public. It still takes three to six months to rehome one. Press articles about dog attacks don’t help the plight of bull breeds in general.

“There was a story about an American bulldog in the papers the other week,” Ira says. “Now, people are calling us up to rehome their bulldogs. The press needs to be more responsible.”

By contrast, one of the jack russells who greeted us so enthusiastically was eight-year-old Rosie, who was in season. She had been on ADM’s website for an hour when we arrived at the office and had already attracted interest. By the time we got home, news of Rosie’s rehoming was announced on social media.

Even though hysterical media stories and economic pressures put strains on all animal charities, ADM tries to stay positive and never refuse to take in a dog.
“We try to work with other rescues to keep dogs safe and, thankfully, sometimes they can place a dog in kennels when we can’t and vice versa,” Ira explains. Saying no to a dog in need is difficult, she adds, but the demand for rescue services is huge.

And so team ADM follow Abi’s lead to raise more funds and awareness, stay positive and spreading the joy of life with dogs. When asked why Ira chose Abi, she says: “Abi chose me.” You can see why.  NM

For more information about the organisation, how to volunteer and the dogs currently looking for homes, visit alldogsmatter.co.uk